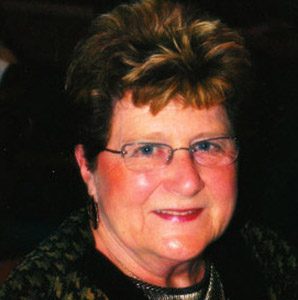 Myrna-Lou was born and raised in Winnipeg of Irish, Scottish and English parents and grandparents. She married Philip McGregor in 1957, and was later widowed in 1995. Myrna-Lou has three children: Shauna (Doug) McGregor Bunting, Gaelyn (Russell) McGregor and Douglas (Christine) McGregor, and three grandchildren: Matthew and Ashleigh Bunting and Colleen McGregor.

The first MHDA Family Membership was taken out in 1962 when Shauna commenced competing, later followed by Gaelyn in 1965. Both went on to attain their Associate, Members and Fellows with Scottish Dance Teachers’ Alliance (SDTA) and attained the status as adjudicators on the Scottish Official Board of Highland Dance (SOBHD) Judges’ Panel.

Within a few years of joining MHDA, Myrna-Lou served in many capacities such as Competition Secretary, Recording Secretary, Marshall and Scorer on the MHDA Executive and held the term of President from 1971-1973. She was instrumental in MHDA’s Centennial Project of the Mid-Canada Open Championships in 1967 and has continued to assist on several committees and projects to this date.

Myrna-Lou is a charter member of the Pavilion of Scotland and served many years on its committee. Most of her time now is spent supporting her granddaughters, Ashleigh and Colleen, who are following in their mothers’ footsteps with their studies and competition in highland dance. She now has added her fourth grandchild Emily to the list. She is 4 1/2 now and she is currently in her 2nd year of highland dance lessons and hopefully will start to complete later this year.

During her presidency, Myrna-Lou was responsible in initiating the original “Dance Out” Program at which time all dancers of MHDA took turns volunteering their talents at Senior Citizen Homes, Personal Care Homes, Hospitals and Conventions. Prior to the start of each new season, she also set up an informal, noncompetitive gathering of fun and games at a B-B-Q for all members and their families.

Myrna-Lou was instrumental in many MHDA fund-raising ventures. She directed, and with the assistance of the dance teachers, produced three successful major concerts at the Centennial Concert Hall: “Scotland: Past, Present and Future” (1969), “Highlander’s Holiday” (1972), and “Salute to Scotland” (1979). The concerts consisted of over 300 MHDA dancers (and members of their families) and included other talented groups in Winnipeg. She has also assisted over the years at the Tartan Tea.

In 1973, Myrna-Lou coordinated the Highland Dance Program at the International Peace Gardens (and later introduced the Piping and Drumming Program which still exists). During this time, she assisted River and District with their Highland Dance Competition in July and coordinated the International Peace Garden Highland Dance Competition at the time of the Highland Dance Program at IMC. This program was later dissolved and in 1979, Myrna-Lou founded the Summer School of Scottish Arts, Inc. (later called the School of Scottish Arts, Inc.) to provide an opportunity for students to have a similar program in Winnipeg allowing both boarding and day students to participate. This summer program which attracted students from North America and Scotland, offered a wide variety of Scottish arts workshops for over 200 highland dancers, pipers and drummers as well as kilting and costume construction for parents.